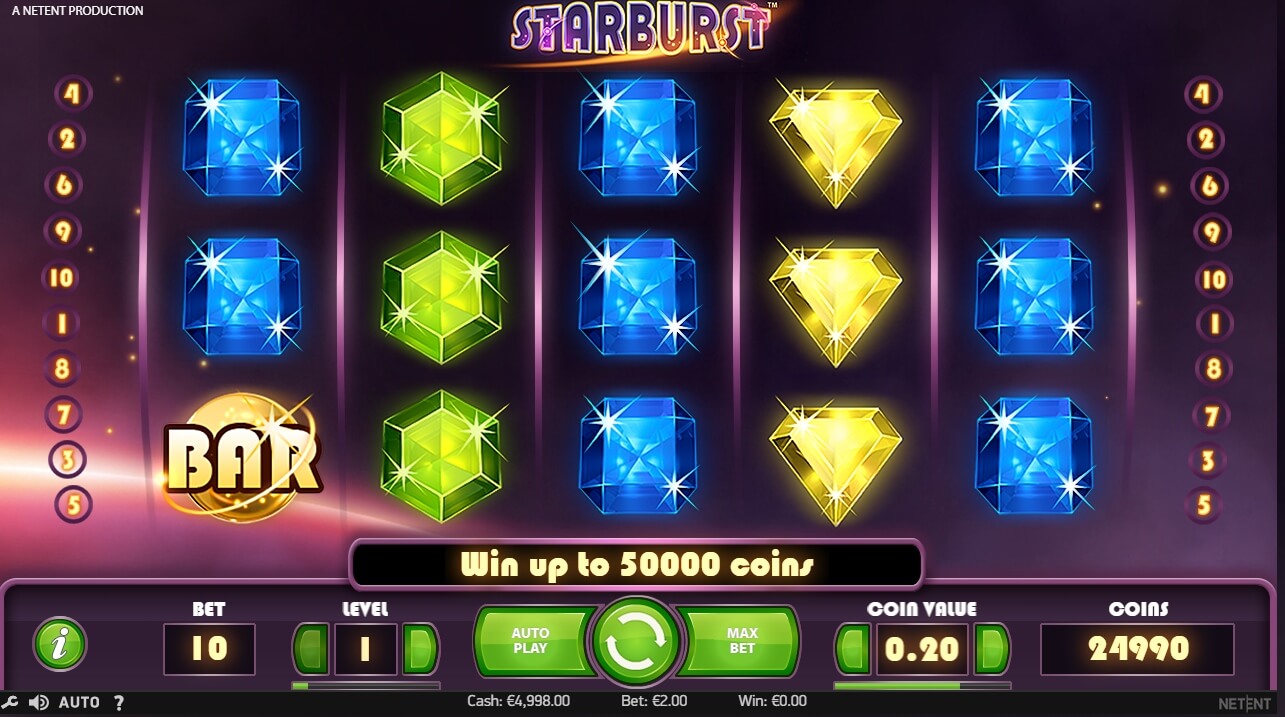 Starburst Slot: Why It’s a Popular Slot on BitCasino

If you’re looking for tried-and-tested industry veterans, the Starburst slot game is for you. Spinning symbols and creating winners for the best part of a decade, this NetEnt slot not only offers affordable betting and simple controls, but also some unique features that make playing a joy.

Of course, there are hundreds of slots on the market right now and, thanks to a few tweaks, you can bet with Bitcoin on virtually all of them. However, even with software developers churning out new titles every other month, the Starburst slot still shines brightly among the industry’s favourites.

Why, we hear you cry? Well, there are plenty of reasons and, if you’ll do us the courtesy of sticking with us for the next few minutes, we’ll give them to you. We’re going to go through this Bitcoin video slot piece by piece, and we’re confident you’ll get to see exactly why the Starburst slot game is regularly listed among our top picks as well as our community’s favourites.

So, if you’re ready to take a spin with this leading online slot, let’s go!

It probably won’t come as a shock to you that Starburst is game that’s set in space. But, in something of a twist on the overall premise, you won’t be spinning stars and planets. No, in this game the stars are simply swirling in the background and set the stage for a selection of brightly coloured gems. Does this mean you don’t feel like you’re in space as you spin? Certainly not. In fact, when you crank up the volume and start pushing buttons, you can see that the developers at NetEnt have attempted to create a “spaceship” vibe.

For example, the soundtrack for every Starburst slot is a mixture of synth sounds that could have been taken from a sci-fi show. Similarly, when you click the bet buttons (which look like controls you’d find on a cartoon-style spaceship) and spin, beeps and alarms sound as if you were entering commands into the ship’s computer system.

Beyond the sounds, track, each symbol has a distinct sparkle to it and some, including the Bar symbol, have a star orbiting them. Finally, when you combine these features with a stellar background and see-through reels, it does look as though you’re staring at the control panel of a spaceship. 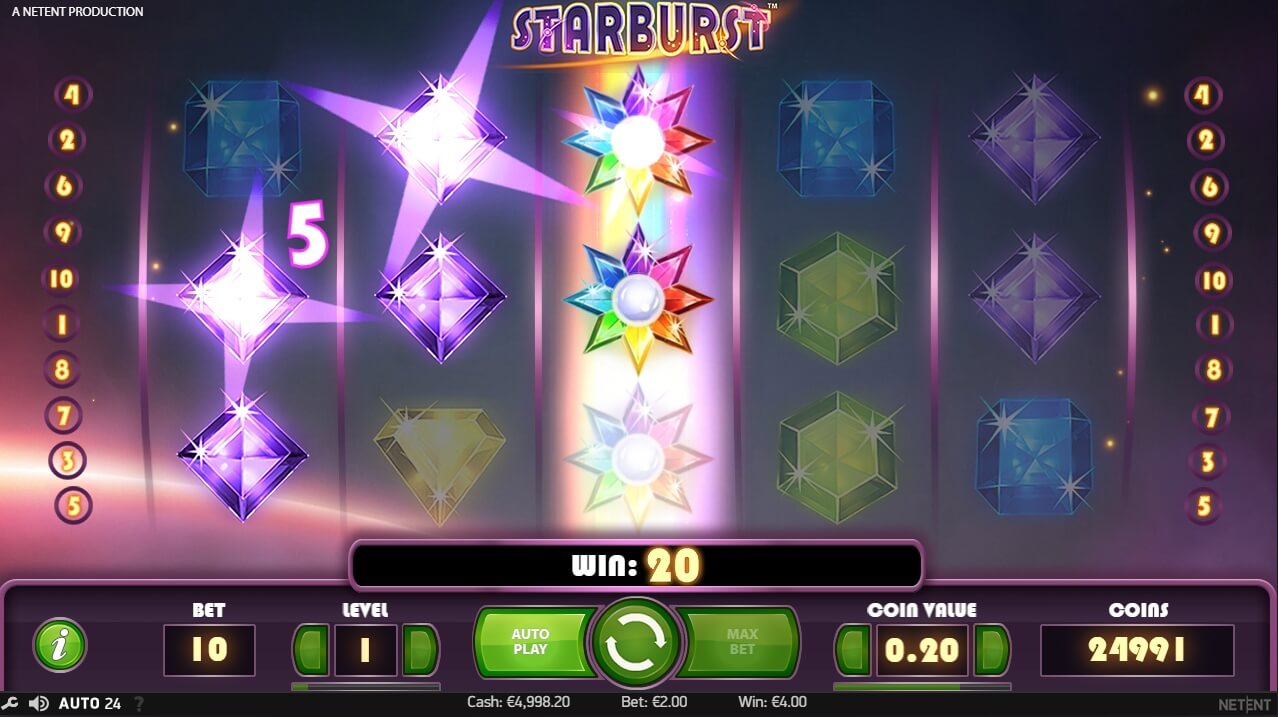 When it comes to setting your bets, the first thing to note is that the Starburst slot game has five reels and 10 non-adjustable paylines. This basically means that you can’t change the number of active winlines and, therefore, the bet size you choose will always be multiplied by 10. Beyond the fixed structure of this Bitcoin slot game, you’ll be able to adjust the following variables:

Level: If you’d like to increase your bet beyond the maximum coin value, you can choose to adjust the “level” between 1 and 10. In Starburst, “level” is the number of coins you’re betting per line. So, at level 1, you’d be betting 1 coin per line.

Once you’ve set your bets, you’ll soon find out that Starburst offers plenty of ways to win. As we’ve said, sparkling gem are most of the prize symbols here and, because payouts are relative, their value always stays the same. What do we mean by this? Basically, instead of giving each symbol a cash value based on the amount you stake, the developers have used a multiplier system. This means any value listed below will stay the same regardless of the amount you bet, because each symbol is a multiple of your coin size.

For example, if your coin value was 0.02 and you picked up a 5x win, it would mean your Bitcoin prize would be worth 0.10 (5 x 0.02). From this, you’ll start to pick up prizes when you align three or more matching symbols from left to right on an active winline. In this game, wins come in the following sizes:

*Values listed are based on five matching symbols.

Starburst Slot Wilds: Getting a Little Something Extra

To complete our Starburst slot review, we can’t ignore the wild feature. Unlike some Bitcoin slots that simply use wilds as universal symbols that can help make winning combinations, Starburst takes things to a new dimension. In simple terms, when you roll in a wild (a multicoloured star) on reels 2, 3 or 4, it will expand and cover the entire reel.

Once the wild has expanded, it will lock in place and you’ll receive a free bonus spin. With the expanded wild helping to create more winning combinations and the spin not costing you anything, this feature is a great way to increase your wins without decreasing your balance. In fact, what makes this bonus even better is that it can be retriggered up to three times, which essentially means you’ll have 3x more chances of winning when you roll in a wild.

Overall, when you combine this stellar wild feature with a wealth of additional ways to win and a quirky interface, it’s easy to see why players love Starburst slots so much. Regardless of whether you’re betting the minimum or the maximum, this Bitcoin slot has the power to pay and entertain in equal measure.

For a chance to spin your bankroll to a lucrative new universe, make sure you join us today and take a turn or two on Starburst on Bitcasino.

‘I say no’: meet Masayoshi Son’s financial guru at SoftBank

Gauri Khan is worried Shah Rukh Khan ‘is talking to his…

Health is no laughing matter, so Harith Iskander & wife…

Rise in requests for additional information on prescribed…

Why ‘House of the Dragon’s’ flash forward…

‘I say no’: meet Masayoshi Son’s financial guru at SoftBank

Gauri Khan is worried Shah Rukh Khan ‘is talking to his…

Health is no laughing matter, so Harith Iskander & wife…

Rise in requests for additional information on prescribed…

Why ‘House of the Dragon’s’ flash forward…