Looking back over some old reviews recently, I found one where I absolutely leathered a place because, despite the fantastic food, I objected strongly to their completely “natural” wine list. What’s embarrassingly clear, reading it four years later, is how the experience made me feel impotent, disempowered and slighted.

If I’d previously been in denial about how wine was changing, that experience definitely tipped me into the “anger phase”. And I wasn’t alone. If you’re involved in the great national obsession with food, drink and restaurants, you cannot but have noticed how incredibly angry a lot of people are about new styles of wine.

For a small but significant subsector of the hospitality industry, “low intervention” or “natural” wines have become a hill worth dying on. They are made by fabulous young winemakers, they ­conform to hardly any of the tedious conventions that have defined the industry for years and they force us to ask overdue and awkward questions about the industrialised methods and commercial practices of traditional winemaking. We should, of course, all be able to get along with exciting new wines and lovely old ones, but, like everything else, one is forced against one’s will to take sides.

The angry traditionalists start with some good points. Some of the new wines taste pretty odd. They are inconsistent and certainly don’t appeal to everyone. But there are natural wines that taste great and traditional classic wines made with little intervention, so to assert that “naturalness” or lack of processing makes them taste universally like cat piss is reductive, wrong and disrespectful. It also smacks of protectionism and privilege.

On the other hand, quite a few of the young wine professionals leading the charge for the new wines are unhelpfully combative.

“I’m sorry, do you only serve natural wines here? Only it doesn’t actually say that on the wine list.”

“We don’t use the terms ‘natural’ or ‘low intervention’ here. It’s just ‘wine’ how it should be.”

Even if that’s true, it’s disrespectful. You might as well add “Toddle off, grandad. You’re irrelevant,” which sounds a lot like textbook protectionism too. Can you see where rage might result?

We Brits have had an odd relationship with wine ever since we became a Roman colony. It’s been the favourite drink of the privileged classes, from royal banquets, through High Tables to Holy Communion, yet we’ve always had to import it. Unfathomable oceans of the stuff from all round Europe. Brits effectively own the sherry, port and madeira industries in their native countries.

We taught the French how to make champagne, then bulk-bought and drank most of it. Bordeaux had always been a huge exporter to Great Britain but was ignored in France until Louis XIV’s doctor prescribed him some. The Brits, though, continued shipping it in by the crate and barrel. But here’s the significant thing. The language of wine appreciation, the rules and lore of wine drinking, were also largely codified and enshrined by us.

If you were buying wine from the next estate, you needed only to know that it tasted good. If you were stocking your cellar from hundreds of miles away, you, or your agents, would invest in bulk quantities which, once purchased, might turn to vinegar. It was vital to know how it might change and develop, travel and keep.

Subjective taste matters, of course, but the world of wine we’ve grown — our appreciation of it, the styles we revere, the conditions in which we serve it, the way we taste it — derive massively from this practice of long-distance purchase. Our national wine culture is rooted in carefully husbanded and hard-won knowledge. When an innovative trend arises that renders most of that irrelevant, it is, at the very least, provocative. 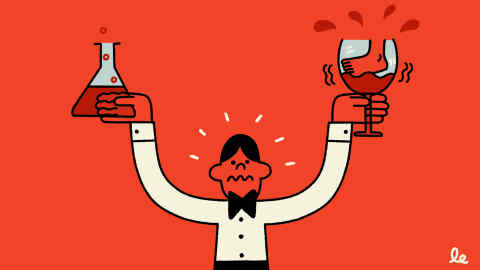 In the four years since I banged out that angry screed, my job has given me the opportunity to drink with everyone, from the most reactionary and traditional to the wildest and newest, and I’ve realised, as the two “sides” line up to slag each other off in the digital agora, that they’re talking entirely different languages. We’re not looking at new wines, we’re looking at new drinkers.

They are an entirely different species. Serve a decent wine to a self-defining aficionado over the age of about 30 and they’ll taste it, judge it and consider buying a case or a bottle. New wines are entirely different. If you enjoy a glass of something brownish and sullenly bubbling that goes particularly well with an interesting dish, you express your enjoyment to your tablemates and then muse on what to try next.

It’s like drinking craft beer. If you like something, you don’t buy a case; you chalk up a lovely experience and move on to the next one. This may be because natural wines are still adventurous in taste, but it seems more likely to be an attitudinal change towards what one might term “experiential drinking”. No generational privilege involved, no history, just simple, in-the-moment enjoyment.

It’s a great way to drink wine. Light, playful and experimental in much the same way as my cohort learnt to appreciate food when we cast off our parents’ bourgeois prejudices about foreign and spicy things, dispatched centuries of formal “connoisseurship” to the pig bin and filled our restaurants with every joyful experiment from street food and foraging to foams and ferments.

The Kübler-Ross model says that grief goes through stages before acceptance. I’m past the anger, bargaining and depression. I feel I’m nearly there. That “life is too short to drink bad wine” has been established by a million fridge magnets. Perhaps now we should add that wine is too much fun to write any of it off.

Denial of responsibility! NewsBit.us is an automatic aggregator around the global media. All the content are available free on Internet. We have just arranged it in one platform for educational purpose only. In each content, the hyperlink to the primary source is specified. All trademarks belong to their rightful owners, all materials to their authors. If you are the owner of the content and do not want us to publish your materials on our website, please contact us by email – [email protected]. The content will be deleted within 24 hours.
Best NewsbusinessBusiness NewsLatest UpdateLive NewsNaturalnews bitnewsbit
0
Share FacebookTwitterGoogle+ReddItWhatsAppPinterestEmail

Cheap laughs: How to spend less than $20 watching L.A. comedy

What is The Best VPN?

What is The Best VPN?