It was the longest official game of netball ever played, stretched over 84 pulsating minutes, with so much to take in at every turn.

It’s still regularly described as the greatest game of netball ever played.

It was a sensory overload for fans watching and an almost out of body experience for the players involved in that game.

The class of 2010 – the Silver Ferns celebrate the gold medal at the 2010 Commonwealth Games.
Photo: ©PHOTOSPORT 2010 www.photosport.co.nz

The Silver Ferns prevailed 66-64 and the elation felt after such a hard fought game is hard to put into words for former Silver Fern Joline Johansson (nee Henry).

“I don’t even know how to explain it …it was an awesome feeling that I can’t really describe.”

Eleven years on former Silver Ferns Joline Johansson, Irene van Dyk, and Anna Harrison remember ‘that game’. Former Australian Diamonds coach Norma Plummer and player Nat von Bertouch also talk to reporter Bridget Tunnicliffe about being on the other side of the ledger.

This audio is not downloadable due to copyright restrictions.

It was an unlikely setting for a game that had fans in New Zealand and Australia glued to their TV sets. India is not a country known for its netball. Also, the lead-up to the Delhi Games had been a controversial one.

Poor ticket sales, incomplete venues, and security concerns dogged the build-up to the Games. It was a race just to get the netball stadium ready in time.

“When you step in your bedroom and all the sewerage comes up through the floor, it’s not what you call really fond memories. You look back on things, some great trips you have and accommodation doesn’t stand out like that one,” Norma Plummer says.

Anna Harrison (nee Scarlett) never expected to be at the Games in Delhi after leaving netball in 2007 to focus on the all-consuming goal of qualifying for the 2012 Olympics in beach volleyball.

But by the time she got to the start of 2010 she’d lost faith that she would be able to reach that Olympic goal – and made the difficult decision to step away from the world tour.

Harrison started the game on the bench but was one of two tactical changes made by coach Ruth Aitken at half time that had a great impact for the Silver Ferns.

Going into the final the Silver Ferns averaged 12.7 rebounds a game – the best of any team. And as it transpired the clutch rebounding of captain Casey Kopua played a big part in the final.

The game looked gone when the Silver Ferns went up by 7 early in the fourth quarter. There were just over 12 minutes left but then Diamonds coach Norma Plummer brought veteran shooter Cath Cox on at Goal Shoot.

As soon as Cox entered the court she started bombing shots in from all over the circle. The two sides were locked 47-all at the end of regular time and so the game went into extra time.

Norma Plummer, who has been left with slightly damaged vocal cords after years of having to raise her voice in noisy stadiums, fought to stay composed on the sideline. 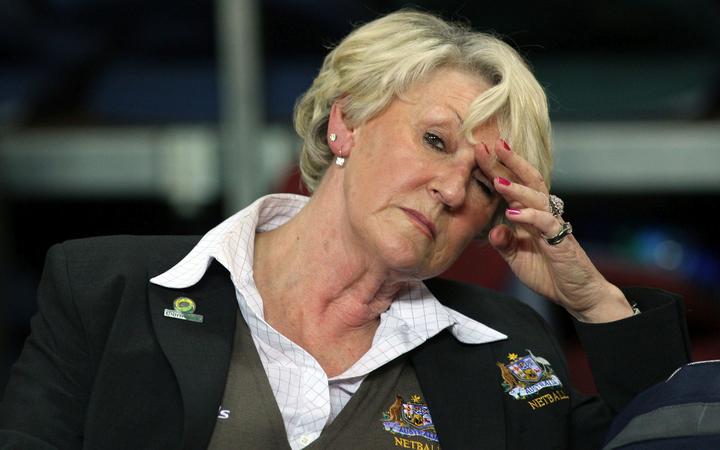 “If I had of been jumping up and down going off my brain, that rubs off on the players. But underneath yeah you’re screaming, you’ve got this game going back and forth and a little mistake is made and just when you thought you were going to finish off with the shot that would win it something happened. You lose the ball in that instance and then next minute, you’re still in the fight,” Plummer says.

Rightly so much is made of the incredible shooting of Maria Folau in that game. But there was a crucial moment in the game that could so easily have not come off.

Australia lost the ball out of court and with 10 seconds left in extra time captain Casey Kopua had no choice but to biff it half-way down the court to Irene van Dyk.

“It showed how much confidence she had in me holding high. And I think it took them by surprise too because you don’t take chances like that in the heat of the moment,” van Dyk says.

“To have the courage to give a ball like that with so much at stake …it’s pretty lucky that we have players like that in New Zealand,” Johansson says.

The winner would be determined by which team went ahead by two. Australian centre Nat Von Bertouch says it was exhausting.

It was an almost unbearable watch for people back in New Zealand. Memories of Manchester eight years prior when the Silver Ferns lost to Australia in double over time resurfaced.

The anticipation was excruciating but pure elation when Folau scored the winning goal.

The enduring image is of Maria Folau and Temepara Bailey rolling on the ground with joy.

“It was awesome. It’s one of the moments that you treasure in your career when it feels like all the hard work and sacrifice for that enjoyment is pretty cool,” says Harrison.

“It was incredibly physical, it was incredibly taxing and just thinking back about it it’s like holy moly I haven’t actually watched it again and I think I should because it was just incredible,” Van Dyk says.

Nat von Bertouch says it was the hardest loss she had felt across her career.

“I remember being on the phone to mum and dad and just crying …that wasn’t really me at that point in my career and I’m like ‘how come I can’t stop myself from crying’ and I think it was that exhaustion and just being so far from home and there were some terror threats before the Games and things like that, we’d felt really quite under pressure for that tournament.

“I remember how devastated we all were and that’s probably what fuelled us going forward into the World Championships the following year because we never wanted to feel like that again.”

“Players and coaches it’s what we put our heart and soul into and so it has to affect you and I know the team hurt for a while there,” Plummer says.

“But the ability is on how do you bounce back. It was a privilege to be part of it all …to be in that history [with the Silver Ferns] of wins and losses.”

Plummer would name Nat von Bertouch as her new captain before the 2011 World Cup.

Australia beat the Silver Ferns 58 – 57 in extra-time to exact a diabolically appropriate revenge for their Commonwealth Games loss.

And so another chapter was added to the storied rivalry.

Denial of responsibility! NewsBit.us is an automatic aggregator around the global media. All the content are available free on Internet. We have just arranged it in one platform for educational purpose only. In each content, the hyperlink to the primary source is specified. All trademarks belong to their rightful owners, all materials to their authors. If you are the owner of the content and do not want us to publish your materials on our website, please contact us by email – [email protected]. The content will be deleted within 24 hours.
Audiobest sports newsCommonwealthCurrent AffairsDelhiFinalGamesnetball
0
Share FacebookTwitterGoogle+ReddItWhatsAppPinterestEmail

iQoo Z5x Launch Date Set for October 20: All You Need to Know