‘You raise me up, so I can stand on mountains’ … Canadian-Italian Natalie Di Luccio’s voice soars over the blue-green baize of Nagaland’s hills.

Wrapped in traditional Naga colours, Di Luccio, who found fame as ‘Bollywood’s soprano’ sings the popular Nordic-Irish song ‘You Raise Me Up’ with members of the Phetsukiku Club, Khonoma. By her side, in the video released last week that has garnered over 1.7 lakh views on YouTube, is Naga folk musician and luthier Atso Chasie playing the string instrument he developed, the Gei-Ü (pronounced Jee-uh) — its sound a blend of lilting bagpipes and resonant violins.

Naga folk musician Atso Chasie with the Gei-Ü, the string instrument he developed

“The Gei-Ü has three strings, one for plucking and two for bowing. Made from bamboo and local wood, the sound bounces off the top. I use a store-bought bow. The Gei-Ü has a unique sound which represents our Naga musical heritage but can blend in with contemporary songs too. I had made a Gei-Ü cover video of the gospel song ‘Via Dolorosa’ that Natalie chanced upon when visiting Khonoma. That’s how the collaboration happened. I was fortunate,” says Chasie over a phone call from Kohima, where he lives. “We started filming in 2019 and the pandemic happened. We had to record some parts again and that delayed it further. I have carried this song with me all this time.”

The hills are alive

In a place where war, melody and Nature breathe, Chasie has carried the music of his people, the Angami, for longer. Distilled over generations, their music now inhabits his dextrous fingers as he plucks and bows the Gei-Ü. His songs travel over the immodestly green hills as steadily as the monsoon raindrops that rake the earth here. Khonoma, where Chasie was raised, is India’s first green village. Emerald paddy fields jostle for space on the terraced slopes with Jurassic-era ferns that border streams.

Known for its successful conservation projects, its forests have been home to the rare Hoolock gibbon and the even rarer Blyth’s tragopan, the State bird. Khonoma is around the bend from Kohima, where British, Indians and the Japanese fought a savage, heroic battle during the Second World War. Now, beyond the cordite and crackle of guns that have peppered this anthropological paradise, music has helped hold together a fraying society. 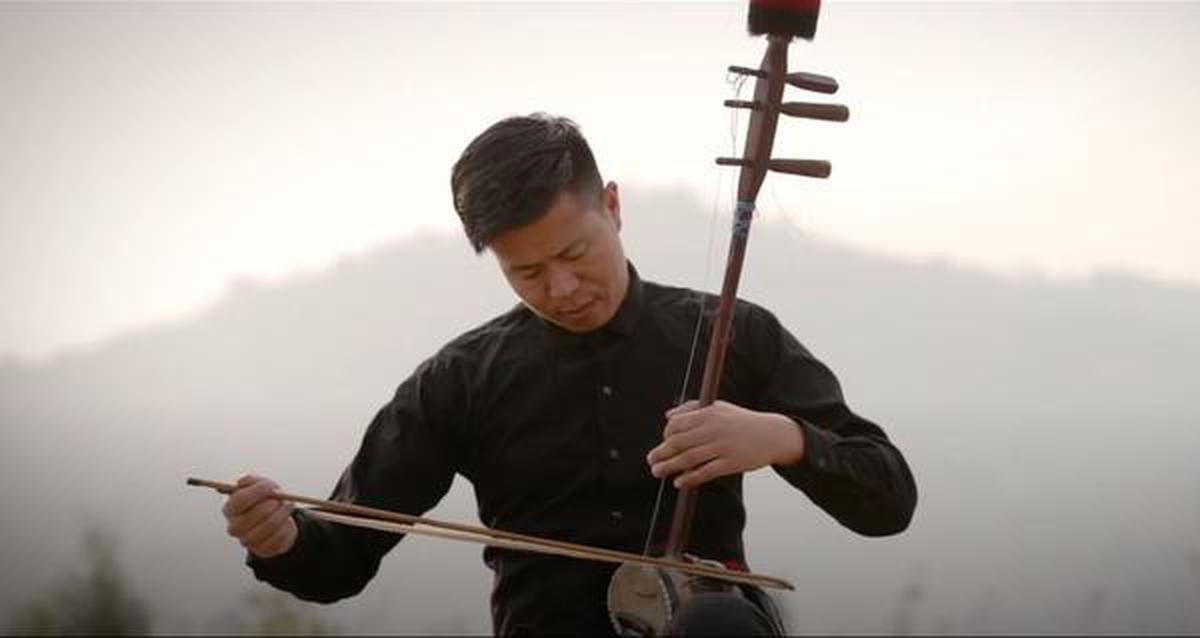 “I have been practising music professionally for 15 years now,” says Chasie. “It is my passion, honed from a childhood spent listening to songs on tape-recorders and radios. For my first formal music classes from Tamarez Lotha, I saved coins to pay the fees. Later I attended a short music course at Patkai Christian College, Chümoukedima which broadened my horizon. Under the guidance of Nibanuo Swuro and Christine Iralu, I completed the Trinity Guildhall ATCL graded exam at Shillong in 2009 and ended up a classical guitarist.”

In the years since Chasie has taught the violin and guitar to people across ages, tuned pianos and repaired bikes. But it is as a luthier that he has come into his own.

“I’m currently focussed on the production of the Gei-Ü. I started making one in 2014; it was formally introduced in 2017,” says Chasie. “It now takes about three weeks to make one and is a refined version developed from our old instruments — the nraiibu and marok kongki. I hope to start making it commercially so that it brings our musicians a step closer to our culture where western influence is at its peak.”

Chasie has mirrored the Gei-Ü’s unusual sound in two music videos — ‘Via Dolorosa’ and ‘The Grand Bison’. Both are rites of passage to the cultural grandeur of Northeast India. So is ‘You Raise Me Up’ produced by Di Luccio with cinematography by Chow Partha Borgohain, in which Chasie performs wearing the colours of the Phom tribe “to promote inter-tribal harmony”.

The video opens with Kolierie Koutsu blowing the horn and features stunning visuals of the chorus by young adults of the Phetsukiku Club that preserves Angami cultural songs, games and practices. The phrase ‘Ra kemo lhenu zivi’ sung by them means “never-fading everlasting beauty” in the Angami language. As it rises above the halo of clouds and settles on listeners worldwide, it is as much a tribute to the beautiful music as it is to the spirit of the Angami people.

Loading...
Denial of responsibility! NewsBit.us is an automatic aggregator around the global media. All the content are available free on Internet. We have just arranged it in one platform for educational purpose only. In each content, the hyperlink to the primary source is specified. All trademarks belong to their rightful owners, all materials to their authors. If you are the owner of the content and do not want us to publish your materials on our website, please contact us by email – [email protected]. The content will be deleted within 24 hours.
Angami NagaAtsoAtso ChasieBest NewsChasiesentertainmentEntertainment bitEntertainment News
0
Share FacebookTwitterGoogle+ReddItWhatsAppPinterestEmail

Europe would be honoured to give asylum to Belarus sprinter,…

Pre and Probiotics role in protecting against infections…

Europe would be honoured to give asylum to Belarus sprinter,…

Pre and Probiotics role in protecting against infections…