US Senator Joe Manchin defended Democrat plans to impose a 15 per cent minimum corporate tax rate and limit “carried interest” as part of a $369bn energy, climate and social spending bill, which he suggested will pass the Senate.

Republicans have attacked Manchin — whose vote was crucial to securing the so-called Inflation Reduction Act — for reversing the corporate tax cuts implemented during the Trump era, saying the move will hamper US investments.

“And with that being said, it’s been the lowest investment of capital expenditure that we’ve ever had. So it’s not the taxes that are driving this,” he said.

On Sunday, Pat Toomey, the Republican senator from Pennsylvania, warned in an interview with CBS News that the new bill, and specifically the corporate tax change, was “going to slow down growth, probably exacerbate a recession that we’re probably already in”.

Democrats have stressed the legislation will not increase taxes for Americans making less than $400,000 a year.

In a series of television appearances on Sunday, Manchin denied that the new 15 per cent minimum corporate tax rate on corporations with profits over $1bn was a new tax, but rather closing “a loophole”.

Manchin’s surprise decision last week to back the bill has sparked condemnation from Republicans. They claim Democrats tricked them into backing a $280bn bipartisan bill to support the US semiconductor industry before revealing hours later that party leaders had secured Manchin’s support to pass the even bigger Inflation Reduction Act.

The Senate is set to take up the legislation next week as part of a final legislative flurry before Congress departs on its annual August recess. 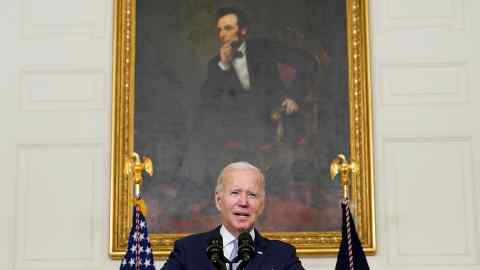 In addition to allocating $369bn towards green initiatives and energy reforms and $64bn to shore up the Affordable Care Act, the bill will also put roughly $300bn towards reducing the deficit. The measures are to be paid for by the new corporate minimum tax rate and by tightening the tax loophole for “carried interest”.

“Carried interest” allows profits accrued by investment managers to be taxed at a lower rate than ordinary income. While currently those investments need to be held for a minimum of three years to be eligible for the lower tax rate, under the new legislation that will be extended to a minimum of five years.

To pass the bill, Democrats will need the support of Senator Kyrsten Sinema of Arizona, a Democrat who, like Manchin, has often broken with her party on key legislation and has previously signalled her opposition to closing the carried interest loophole.

On Sunday, Manchin said he would not speak for Sinema or how she planned to vote on the bill, but said he believed she was broadly in favour of many of the measures the legislation proposed, especially as the bill provided “no tax increases”, as Sinema had demanded.

“She has a tremendous amount of input in this piece of legislation. And I would like to think she would be favourable towards it,” Manchin told Meet The Press.

Are you curious about the FT’s environmental sustainability commitments? Find out more about our science-based targets here

Denial of responsibility! NewsBit.us is an automatic aggregator around the global media. All the content are available free on Internet. We have just arranged it in one platform for educational purpose only. In each content, the hyperlink to the primary source is specified. All trademarks belong to their rightful owners, all materials to their authors. If you are the owner of the content and do not want us to publish your materials on our website, please contact us by email – [email protected]. The content will be deleted within 24 hours.
Best NewsbillbusinessBusiness NewsclimateClosesLatest UpdateLive News
0
Share FacebookTwitterGoogle+ReddItWhatsAppPinterestEmail

Andrew Koji almost gave up on acting. Now the ‘Bullet…

Andrew Koji almost gave up on acting. Now the ‘Bullet…