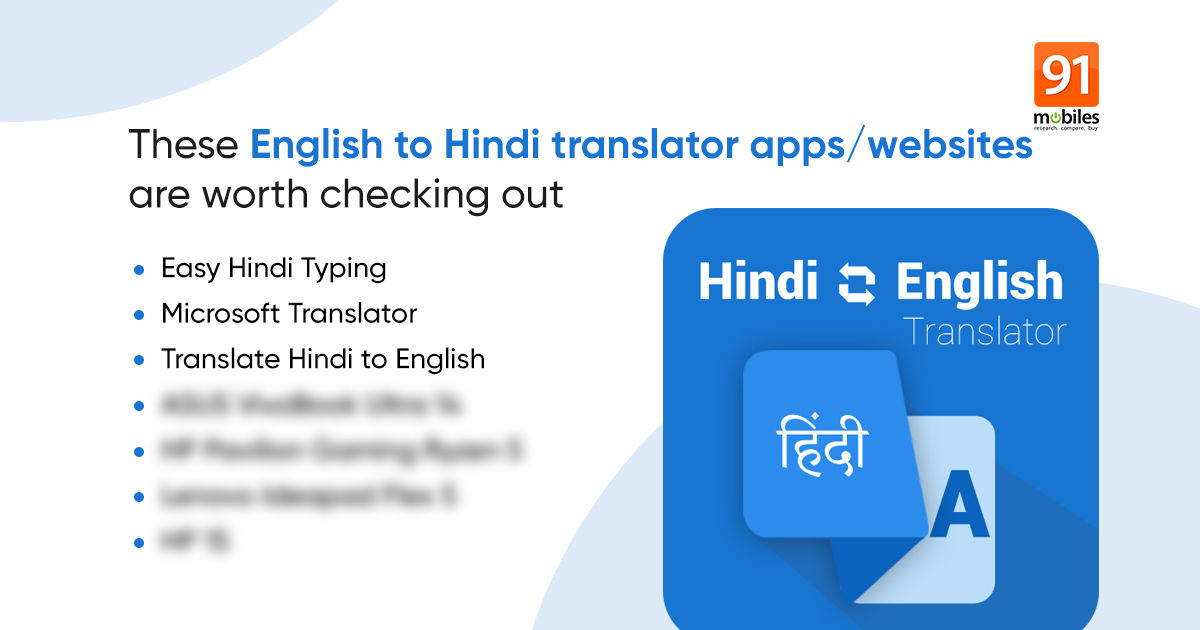 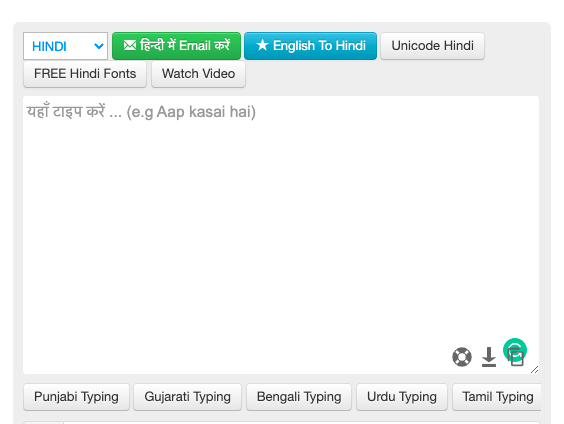 Easy Hindi Typing is a web tool that can translate English to Hindi or Hindi to English. There are separate tabs for both. In the Hindi to English translate tab, you can write in Hinglish and the website will automatically translate it to Hindi. To see its English translation, click on the green Translate button on the screen. You can then edit, copy, and download translated text. The website supports more regional languages than Google Translate. You can translate text from/ to Punjabi, Malayalam, Tamil, Marathi, Telugu, and Gujarati, among others using the Easy Hindi Typing website.

Translate solves the problem of grammatical errors. The web tool comes with both machine and human translation skills. You can start with machine translation to translate your text from Hindi to English or vice versa. It’s completely free to use and can be used to translate text from images as well. If you’re not sure whether the translated text is correct or not, you can use Translate’s human translation. The website claims that native and bilingual translators will be working on your texts to conduct the same meaning and emotional impact from the source language. The first 50 words are free for new users, following which you’ll be charged $0.7 (~Rs 51) for every word checked by Translate’s professionals. 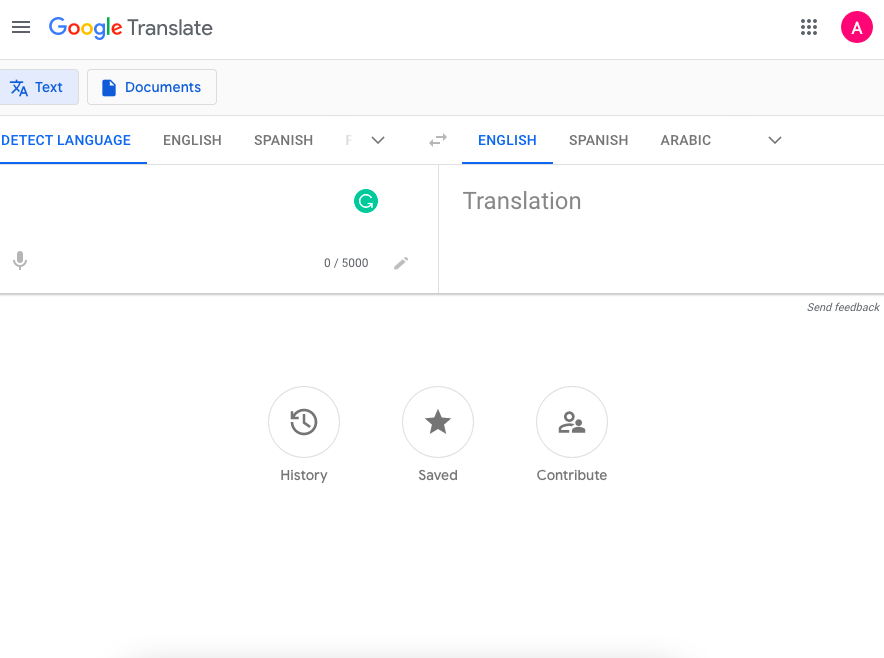 Arguably the most popular platform for translation – not just for Hindi to English and vice versa. Google Translate supports over 100 languages, including Spanish, French, Bengali, and Chinese. The platform is completely free to use and offers translation in real time. You can write, speak, or upload a document to translate English to Hindi or Hindi to English using Google Translate. While the platform can automatically detect the language you want to translate, the translation is set to English by default. If you want to change that, click on the ‘down’ icon to select the language from the drop-down menu. Google Translate also allows you to copy, share, and edit the translated text. As for privacy, Google claims that it does not use any of your content for any purpose except to provide you with the service.

Typing Baba web tool for Hindi to English or English to Hindi translation is pretty simple and straightforward. All you have to do is go to the website –> select the source language (by default it’s English, but you can click on the Switch icon to make it Hindi) –> and start typing. Once you’ve added the text, just click on the ‘Translate’ button. Your translated text will appear in the box below. You can copy the text, save it on your device, and give the print command directly from the website. Having said that, the translated text can’t be edited. Another limitation of Typing Baba is that you can only translate 2,000 words at a time. The web tool also doesn’t support text translation from images and speak to translate either. Use Typing Baba for its simplicity. 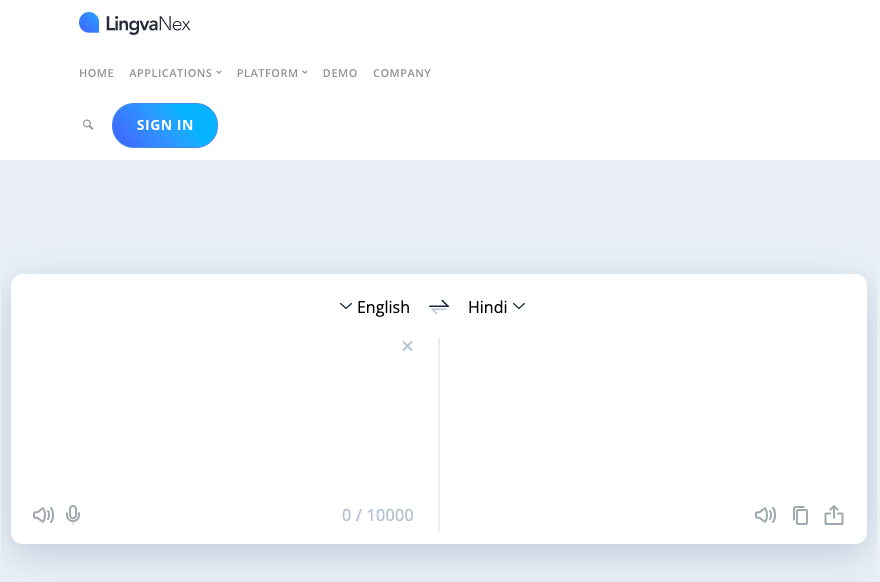 If you love Typing Baba UI but want a slightly higher word limit, try LingvaNex. The website can translate up to 10,000 words at a time. The LingvaNex UI is also pretty simple. The webpage comes with two boxes: the one on the left is the source box where you can type in your text, while the right one shows the translation. You can change the language from the drop-down menu, which appears when you click on the ‘down’ icon. Additionally, the web tool comes with a built-in dictionary to look up the meaning of a word without leaving the page. LingvaNex also supports translation by voice.

You can also use the Google Translate app on your Android mobile phone or iPhone to translate English to Hindi or the other way around. The app comes with pretty much the same features as the website, including multiple language support and speech translation. Additionally, the Google Translate app features the ability to translate text from live images, using the camera. There is a ‘Conversation’ feature, which as the name would suggest, listens to the conversation and translates it into text in real time. You can also use the feature to translate a sentence into a language not known by you. Once the sentence is translated, it’s spoken aloud by a computer-generated voice coming from the phone so you know how it’s read. The Google Translate app also works offline by downloading the offline translation file. 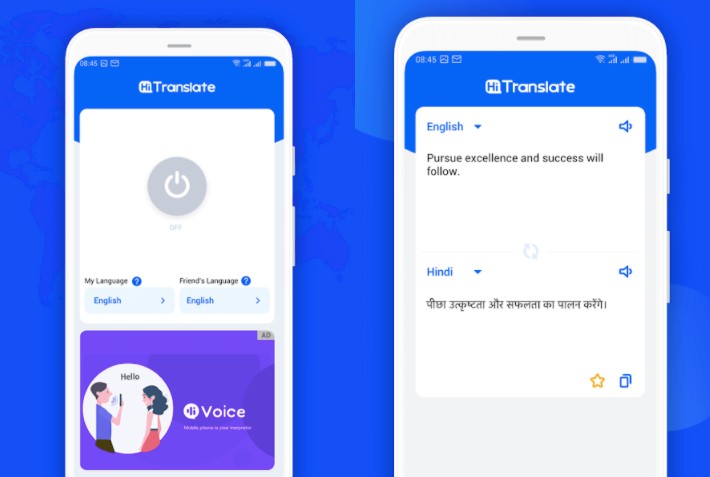 The Hi Translate app is rated among the most favourite translators for both text and images. The app is available for both Android and iOS devices. Hi Translate supports up to 100 languages, more than Google Translate, including Hindi to English and vice versa. You can manually enter the text to get the translation results or point the phone’s camera to any image or signboard to see what it means in your mother tongue. The Android version of Hi Translate supports cross-application translation, which means you can use it with any app to read/ write in almost any language. In addition to this, the app also comes with real-time text translation, voice translation, and offline translation.

You can rely on the Microsoft Translator app as well for all your translations, including English to Hindi. While the app supports over 60 languages, which is less than Google Translate, it’s completely free to use and works offline as well. You can type, speak, or upload a document using the camera icon to translate the text. Other features of the Microsoft Translator include two-way conversations (with up to 100 people at once), phrasebooks, pronunciation guides, Android Wear support, and alternate translations. The app is available for download on Android and iOS devices via Google Play Store and App Store respectively. 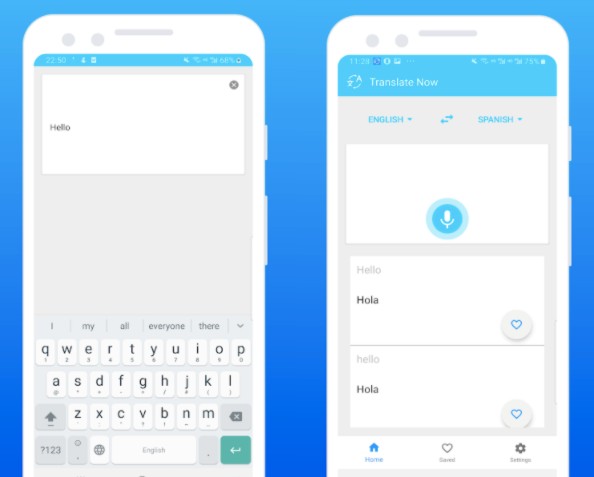 Translate Now is another app that you can rely on for all your Hindi to English or Hindi to English translation. The app’s features are not as vast as Google Translate or Microsoft Translator, but it should get the job done. The Translate Now setup process is pretty simple and straightforward, in the sense that it doesn’t require many permissions. You can either write or paste the text on the app to translate it into your preferred language. The translated text can be copied or shared, but can’t be edited.

You can learn and translate text from Hindi to English using this app. Available for both Android mobile phones and iPhones, the Translate Hindi to English app supports translator, dictionary, learning, lesson, game, and news. The lesson section allows daily learning of the English language. Additionally, you can check your progress with a test. The dictionary section, which works both offline and online, helps you learn the meaning of new words every day.

Denial of responsibility! NewsBit.us is an automatic aggregator around the global media. All the content are available free on Internet. We have just arranged it in one platform for educational purpose only. In each content, the hyperlink to the primary source is specified. All trademarks belong to their rightful owners, all materials to their authors. If you are the owner of the content and do not want us to publish your materials on our website, please contact us by email – [email protected]. The content will be deleted within 24 hours.
91mobiles.comappsbest technology newsEnglishenglish to hindi translationHindilaptoplist
0
Share FacebookTwitterGoogle+ReddItWhatsAppPinterestEmail

Google to bring these new updates to Docs, Sheets – Times of India

How to unsend an Outlook email on a Mac

How to unsend an Outlook email on a Mac