The Blues have thumped the Melbourne Rebels 71-28 in their Super Rugby Pacific match at Eden Park.

Trailing 0-14 after five minutes, the Blues turned it on with seven unanswered tries to take a 47-14 lead into the break.

Four more tries were added for the Blues in the second half, taking them to their tenth straight victory and extending their lead at the top of the table.

Rieko Ioane ended up with a hat-trick, while his brother Akira crossed the line for two tries of his own.

The Rebels managed two late tries to give some sort of respectability to the scoreline, but the 70 minutes between tries belonged to the Blues, as they put their scratchy form from recent weeks in Australia behind them.

Highlanders beat the Reds in Brisbane

The Highlanders have notched up their second win in a row, beating the Queensland Reds 27-19 at Suncorp Stadium.

Queensland led 12-nil early, before the Highlanders scored two tries in six-minutes late in the second-half to claim an eight-point win. 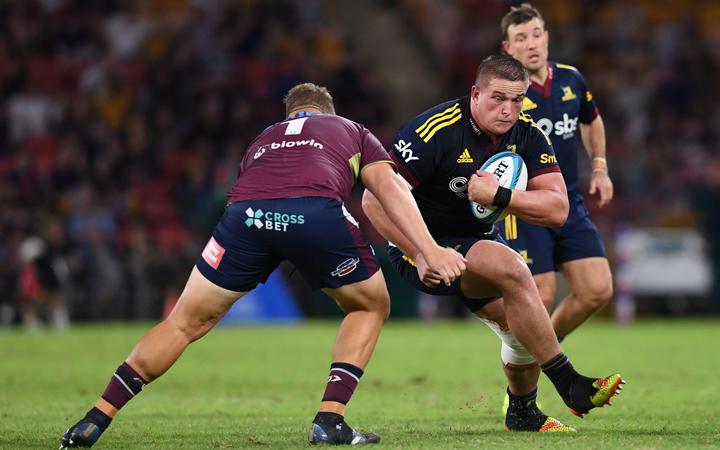 Highlanders lock Josh Dickson was yellow-carded for a dangerous tackle in the 12th minute, before another yellow card to Marino Mikaele-Tu’u reduced the visitors to 13-men four minutes later.

A devastating run by outside-centre Thomas Umaga-Jensen gave the Highlanders their first try of the night, with the Reds taking a 12-10 advantage into half-time.

Scott Gregory gave the Highlander’s lead with a 61st minute try, before a Folau Fakatava five-pointer gave the Southerners an unassailable 27-19 lead with 12-minutes to play.

The win takes the Highlanders to eighth on the ladder, while the third straight loss for the Reds sees them in fifth.

Things will not get any easier for the reds, who travel to Eden Park next week to take on the high flying Blues.

Denial of responsibility! NewsBit.us is an automatic aggregator around the global media. All the content are available free on Internet. We have just arranged it in one platform for educational purpose only. In each content, the hyperlink to the primary source is specified. All trademarks belong to their rightful owners, all materials to their authors. If you are the owner of the content and do not want us to publish your materials on our website, please contact us by email – [email protected]. The content will be deleted within 24 hours.
Audiobest sports newsBluesCurrent AffairsEdgeHighlandersNewsnewsbit
0
Share FacebookTwitterGoogle+ReddItWhatsAppPinterestEmail

Stranger Things 4 Review: Too Big for Its Own Good

Microsoft Keystone Is Officially Confirmed to Be an Upcoming…

SA hospital groups are getting healthier, and bigger

Stranger Things 4 Review: Too Big for Its Own Good

Microsoft Keystone Is Officially Confirmed to Be an Upcoming…

SA hospital groups are getting healthier, and bigger