The Apple Watch has always been the most well-rounded premium smartwatch, and the latest iteration in the series just solidifies that belief, at least for me. In a way, the Apple Watch Series 7 seems to continue in the same vein as the iPhone 13 lineup, in the sense that it comes across as an incremental update over the previous model. That said, the latest watch has received meaningful upgrades in key aspects, again similar to the iPhone 13 models. And those upgrades make the watch even more capable, though it might be a bit too far fetched to say that it has achieved perfection. Let me elaborate.

First things first. The biggest and more important upgrade on the Apple Watch Series 7 is the screen. Except for the corners which are more rounded than before, there’s barely any difference in the overall design language, and you won’t be able to make out any changes as compared to the previous generation. Apple has gone ahead and fitted a larger display without changing the design. So, the 40mm case size from earlier is 41mm now, while the 44mm size has gone up to 45mm. This might seem insignificant at first, but combined with the fact that the bezels are narrower than before and the screen stretches over the edges of the fascia, the resulting experience does get a massive boost. 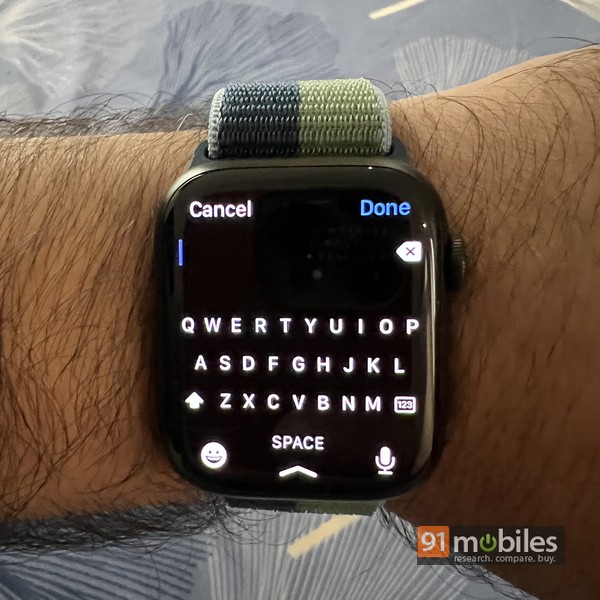 This not only enables Apple to bump up the font sizes and sizes of other elements on the screen to make them more readable, the brand has even crammed in a full QWERTY keyboard for you to type on for responding to messages. In fact, one of the new watch faces that have been added includes two full-sized complications. The 1.9-inch OLED display on the 45mm model offers a resolution of 396 x 484 pixels and 1000 nits brightness (dropping to 500 nits when always on), and is extremely sharp and vivid, and nicely readable even under bright sunlight. 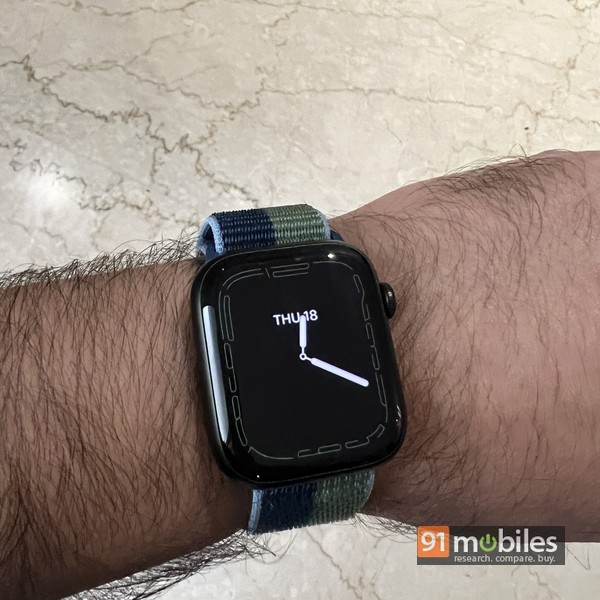 The build quality has received an upgrade too, with the new IP6X rating for dust resistance and Apple claiming that the screen on the Watch Series 7 is more crack-resistant than before. The front crystal on the screen has been redesigned to make it more resistant to cracks, and is 50 percent thicker than before for added strength. To make up for it, the touch sensor has been integrated into the OLED panel, thereby reducing thickness. The added sturdiness is more than welcome of course, bringing in more peace of mind for those who’re active users and are worried about how safe their investment would be. 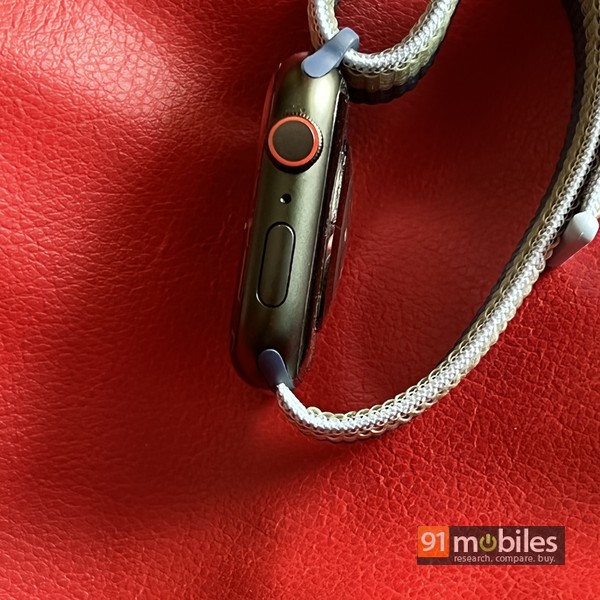 As usual, the other aspects of the design include the rotating digital crown on one side, and a speaker on the opposite side. The grooves for the straps are located on the top and bottom edges, just like the previous models in the lineup. A side effect of the unchanged design is the fact that Watch Series 7 remains compatible with the plethora of watch bands, available both from Apple as well as third-party vendors, which bodes well for you if you’re upgrading from an older model and had purchased additional straps earlier. 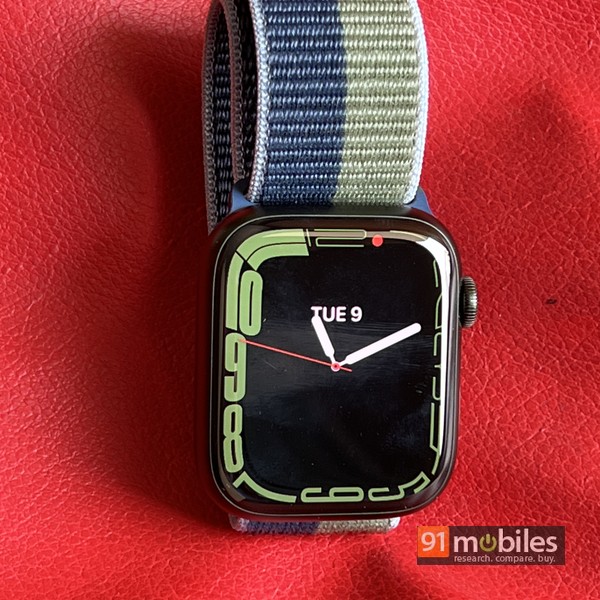 And as with most things Apple, it’s not too difficult to find third-party bands online if you don’t want to spend on Apple-branded ones… though the fit and finish might not match up. On that note, pictured here is the Abyss Blue/Moss Green Sport Loop band from Apple, carrying a sticker price of Rs 3,900.

While the screen is the biggest upgrade, the Series 7 brings other new goodies too. For one, there’s the new S7 chip. It doesn’t really offer any performance benefits though, and is supposed to be at par with the S6 chip in the previous model. That said, the performance of the watch remains extremely fluid, and lag-free. The device offers a whole range of fitness features, and support for new workouts has been added. Support for fall detection, which is one of the key highlights of the Apple Watch’s health and safety features, has now been added for workouts as well, coming as part of Watch OS 8. Just in case you didn’t know, the fall detection feature sends out an automatic alert in case you take a hard fall and are inactive for more than a minute, so help can reach you in time. And going by user accounts, the feature has turned out to be a lifesaver for many. Speaking of, another vital feature in the Apple Watch’s repertoire is ECG, which detects irregular heartbeats. The Apple Watch was the first wearable to bring this feature to India, but now you do have another couple of options that come in the form of the Fitbit Sense (review) and the Fitbit Charge 5 that boast this. In fact, if you’re an Android user, these Fitbit wearables are your only options if you would like to have the ECG feature, since the Samsung Galaxy Watch 4 and Watch 4 Classic (review)… which do offer this functionality, don’t have it enabled in India yet. Apart from an extensive range of workouts and the other usual features like monitoring steps and heart rate, the other key features of note offered by the Apple Watch Series 7 include SpO2, breathing exercises, and sleep monitoring as well. The device pushes you to complete three activity rings each day, representing physical activity goals – workouts, standing and movement. While all of these work quite well (and accurately, I might add), I think the sleep monitoring feature is an area where the Apple Watch does need improvement. The device tracks sleep based on set schedules, and the companion app doesn’t really offer detailed insights into your sleeping patterns. 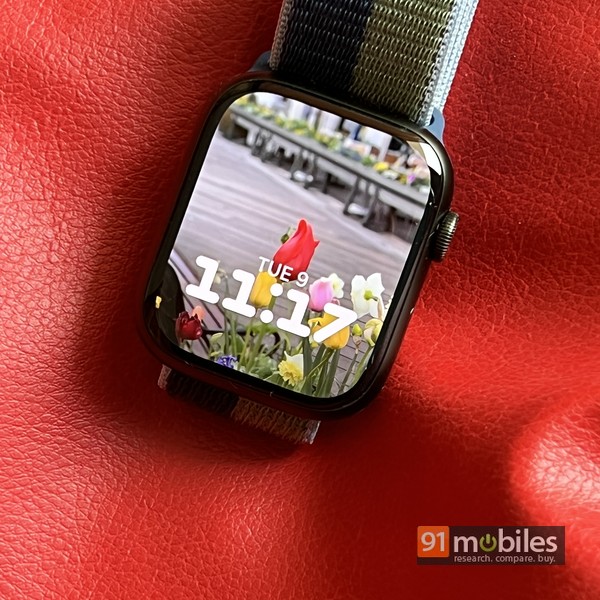 Health and fitness functions apart, the Apple Watch Series 7 also shines in terms of smarts. There are quite a few watch faces to choose from, including new ones such as the Contour watch face which makes great use of the larger screen and features animated numerals placed right on the edges of the screen. One of my personal favourites is the Portrait watch face, which comes as part of the WatchOS 8 update. It allows you to choose up to 24 portrait photos from your gallery and creates a watch face that keeps cycling between those images each time you wake up the watch display. Not just that, it makes great use of the background-foreground separation in the portrait photos to create a nice depth effect too. WatchOS 8, the latest version of Apple’s smartwatch platform, also brings quite a few new features such as displaying highlights from your photos, the ability to send photos via Mail and Messages, Focus Modes (same as the ones in iOS 15), a new and improved Breathe app, monitoring respiratory rate while sleeping, and more. 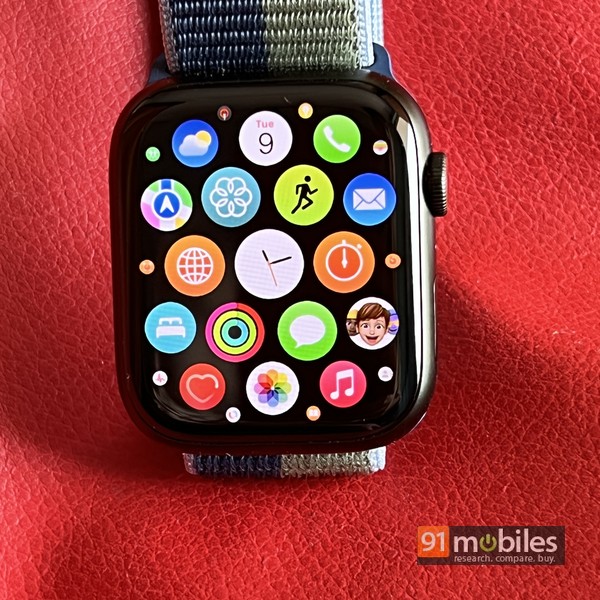 Talking about operation and usage, the Apple Watch Series 7 features the same UI that should feel familiar if you’ve used any of the brand’s smartwatches before. There’s hardly any learning curve involved even for new users. Swipe up for quick settings, swipe down for notifications, sideways to switch between watch faces and press the crown to access the apps. The crown can be rotated for scrolling through menus and apps, and the side button gives you access to recent apps. 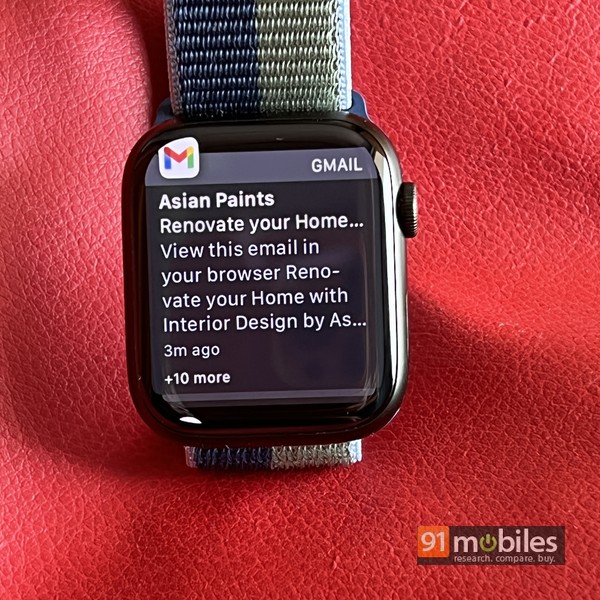 The smartwatch remains the best overall in terms of notifications and what you can do with them. For example, readability for emails and messages is great, and you can even respond to them using modes like the aforementioned QWERTY, scribbling letters on the screen or using voice dictation. There’s still no support for third-party watch faces, but there’s a fair selection available. Most of the available watch faces can be customised extensively in terms of various aspects like colours, complications etc via the Watch companion app that comes preloaded on iPhones. There are quite a few third-party apps and games too, and the built-in speaker and microphone let you make and handle calls as well. And if you opt for the cellular model which has an eSIM, you can make calls and perform quite a few tasks without your iPhone too. Of course, I’m just scratching the surface here, but the fact is that the Apple Watch Series 7 is quite an all-rounder. 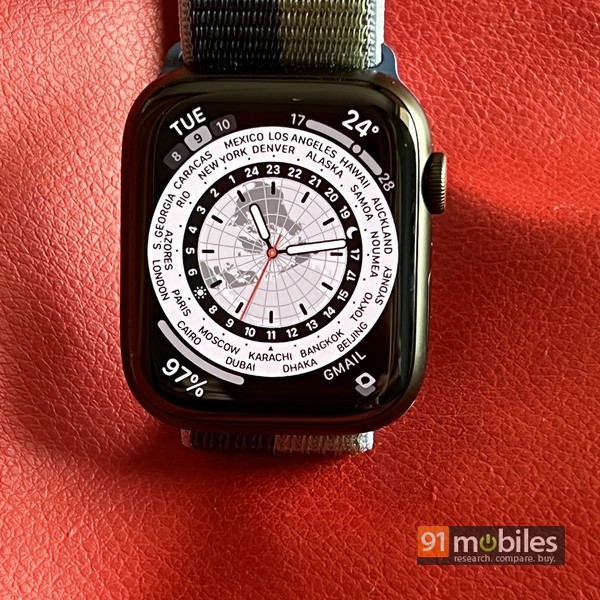 Next up, the battery life. Now this is an area which does leave me wanting for more. You see, Apple promises 18 hours on a single charge, and while the device does deliver on that, I don’t think it’s enough. You could get about a day and half with frugal usage, but realistically, you’d end up charging it every day. Another bummer is the fact that while the Apple Watch Series 7 features fast charging and comes with an updated charger with a Type-C connector in the box, the feature isn’t available in India yet because of pending regulatory approvals. 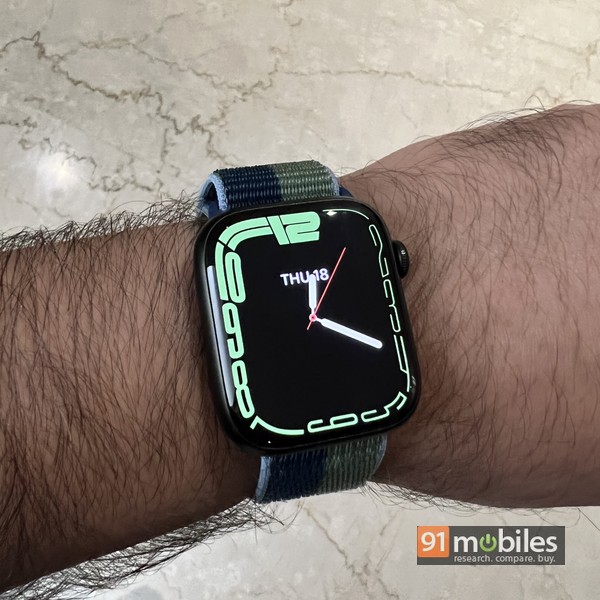 So, is the Apple Watch Series 7 for you? With an asking price of Rs 41,900 for the base model, it doesn’t come cheap. If you’re looking to save some money, the Apple Watch SE is also an option. However, opting for that would mean missing out on features like the always-on display, SpO2 and ECG. If you can afford it though, the Apple Watch Series 7 is an extremely capable, all-rounder of a smartwatch that’s pretty much a no-brainer if you’re an iPhone user.

Denial of responsibility! NewsBit.us is an automatic aggregator around the global media. All the content are available free on Internet. We have just arranged it in one platform for educational purpose only. In each content, the hyperlink to the primary source is specified. All trademarks belong to their rightful owners, all materials to their authors. If you are the owner of the content and do not want us to publish your materials on our website, please contact us by email – [email protected]. The content will be deleted within 24 hours.
91mobilescomApplebest technology newsconsnews update technewsbitProsreview
0
Share FacebookTwitterGoogle+ReddItWhatsAppPinterestEmail

Sachin Tendulkar lauds Shreyas Iyer’s maiden Test hundred: ‘Nice to see you as a part of Team India in whites’

IPL 2022 Player Retention Live streaming: When and where to…

Get a lifetime of learning with this bundle that grants you…

What’s on TV This Week: ‘The Waltons,’ ‘CMA Country…

IPL 2022 Player Retention Live streaming: When and where to…

Get a lifetime of learning with this bundle that grants you…

What’s on TV This Week: ‘The Waltons,’ ‘CMA Country…